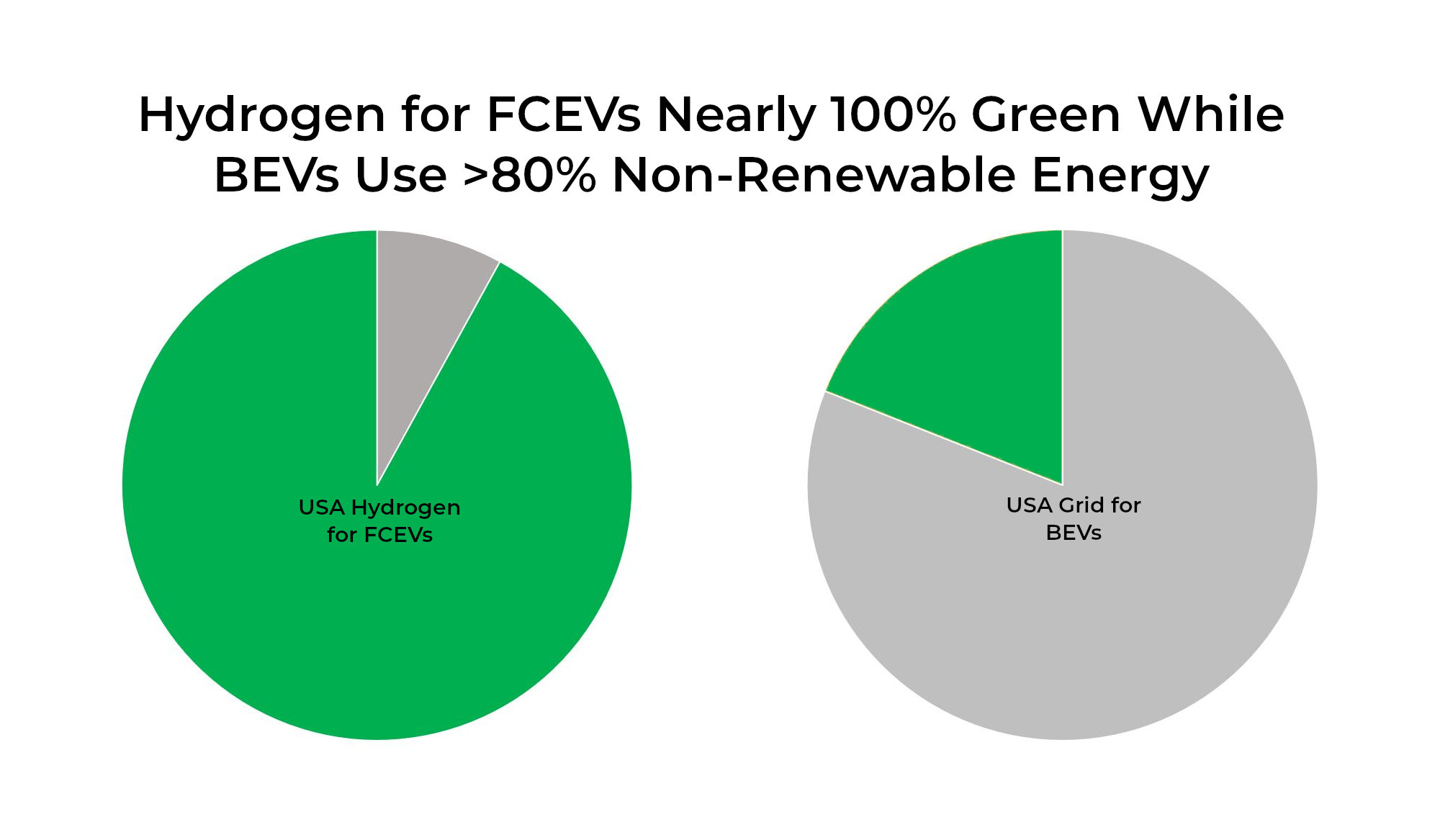 This is a huge turn of events because for many years BEVangelists & hydrogen haters have criticized hydrogen as coming from fossil fuels by repeating misleading information.   It’s true for over 100 years most hydrogen has been made from fossil fuels primarily for the oil industry and to make fertilizer.   But what is completely misleading is that legacy hydrogen production has nothing to do with hydrogen’s green potential which we can now boast, demonstrate, and call attention to.  It is very disingenuous to mislead people into thinking hydrogen for FCEVs is less green than electricity when over 80% of electricity for charging BEVs in the USA comes from non-renewable resources.  Oh my how the tables have turned in just this past month (May 2022).  Now there is a stark divide between which fuel is greener, FCEVs use >90% green hydrogen and BEVs charge with >80% non-renewable fuels.

The bottom line is this:   more than 90% of hydrogen for FCEVs comes from renewable resources.   More than 80% of electricity for charging BEVs comes from non-renewable resources.   Furthermore, there is not a single off-grid charger powered by solar or wind in the world as promised by Elon Musk five years ago.   We have no way to know when anyone will be able to show us how BEV charging can come from renewable energy. Not. One. Single. Renewable. Supercharger. Five. Years. Later.  Full stop.

All Superchargers are being converted to solar/battery power. Over time, almost all will disconnect from the electricity grid.

Here is the question for BEVangelists:  when will you be able to demonstrate that BEVs can be charged from renewable off-grid energy?   For example, after a hurricane when the grid is down and transportation is a life or death matter, how can you charge ambulances & fire trucks without diesel generators?   It’s a rhetorical question, it can’t be done.   Hydrogen haters can call us names, but they can’t prove us wrong.  I’ll take that advantage any day of the week.

Here’s the good news for lithium-ion batteries:   they can be charged from renewable hydrogen instead of coal, natural gas, and diesel generators.   All you have to do, is admit you have been wrong the whole time and say you’re sorry.  The hydrogen economy has room for forgiveness.