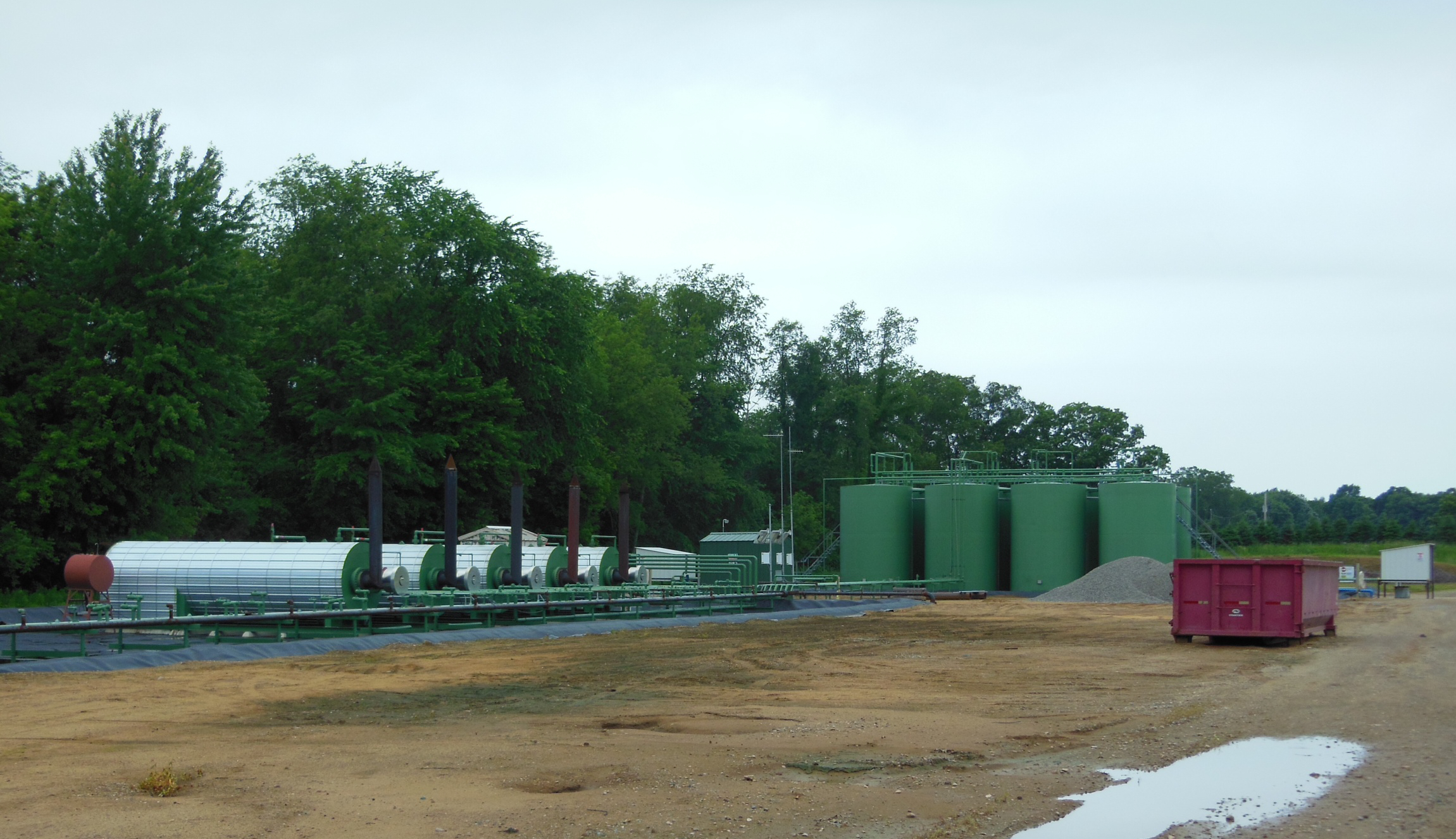 2014 Hydrocarbon production results for Michigan have all been updated into the Michigan database.   Merit Energy’s Norwich Unit located just west of Higgins Lake was the #1 oil producer in 2014 at 119,187 barrels.   This unit, made up of 288 wells, is referred to as a water flooding unit which means it is in secondary recovery.  The per well production for this unit is actually very low at just over 1.1 BOPD.   Take a minute to click here to view our interactive map of the 288 wells that make up this PRU (a static image of our interactive map is shown below).  Zoom in on our Google map a little and you’ll see black oil markers mixed in with blue water injection markers.   Water, which is heavier than oil, is injected in the oil reservoir through wells at the blue colored markers which pushes oil up to the surface at wells located at the black colored markers where there are pumpjacks.

Even though this PRU is the #1 oil producing unit in Michigan for 2014, on a per well basis, it wouldn’t even rank in the top 1,000.   RMP is compiling and analyzing Michigan production data and making it easier to follow so you can better understand what is getting produced and where.  RMP is adding powerful meta data to our map searches to help find wells that are top producers and also wells & facilities that have caused ground water contamination.  Our search engine is getting stronger each month and we will be rolling out exclusive new searching functionality that will allow our users to search for things like locations where soil or ground water has been contaminated.

We intend to make it easier for people to understand how our natural resources are being used to produce energy and profit and also the societal costs & risks associated with that production.  The better we all understand our natural resources, the better we can protect them for future generations.  You can help fund our research by clicking here to make a tax deductible donation to our 501(c)3 organization.

Jackson county is home to 8 of the top 10 oil producing wells in Michigan in 2014.   West Bay is the operator of record for 5 of the top ten wells and one could imagine West Bay had a good year financially given the approximately $100/bbl price of oil throughout the 2014 calendar year.  Savoy has the #3, #4, and #5 producers in the top 10 and they’re also Jackson county in Columbia township.  Rounding out the top 10 production units for oil in 2014 is Breitburn’s Beaver Creek unit made up of 35 producing wells.  All of West Bay’s and Savoy’s PRUs are 1:1 between well number and PRU meaning there is only one well that makes up the production unit.

The Trenton and Black River formations in Jackson county have taken the oil production crown from the Niagaran formation in Northern Michigan which was the top oil producer in the 1980’s and 1990’s.   The featured image for this month’s MOGM is the Napoleon 32 Common Tank Battery where more oil was produced in Michigan in 2014 than just about any other CTB in our state with the possible exception of Savoy’s wells in Columbia township nearby.

In May, RMP will publish a supplemental edition of our MOGM magazine showing the top oil, gas, and NGL producers in Michigan in 2014.  Stay tuned for it and make sure you watch the video version which accompanies every issue of the MOGM here at RMP so you can see where things are on the map and start to learn to use the map yourself.   RMP’s interactive map is the best map on the internet when it comes to oil & gas production for Michigan.

In other Michigan oil & gas news the Lucas 1-13 HD1 well had plugging instructions issued.  This well was drilled in December of 2010 and marks one of the first wells targeting the Collingwood formation in Michigan’s history.  This well got our attention in 2011 as it was one of the first wells to make the High Volume Hydraulically Fractured list.   This well had integrity issues with holding pressure and it was very difficult to obtain good information about the well to understand what was going on.  Chevron, who purchased the well from Atlas, did not respond to questions because of pending litigation between the two companies.  Apparently the casing was faulty and would not hold pressure during pressure testing.   Soon this well will be plugged and abandoned and we might never know what terms Atlas and Chevron came to.

Information also published in April of 2015 was that the Sherwood 1-22HD1 well was plugged in July of 2014.   We knew this to be true  last year based on some of our on the ground friends who lived near this well on Fowlerville Road.  They were sending us pictures and updates throughout the drilling and completing process of this well and indicated to us that it was dry in June of 2014.   But, this month we officially see the Sherwood 1-22HD1 well on the pluggings list issued by Michigan’s OOGM.

Wyotex Drilling Ventures has now applied for 4 attempts in the A1 in 2015 along with 4 permits that were also approved for the A1 in 2015.  This extends what we said last month about how it’s looking like Wyotex Drilling Ventures is making a concerted effort at the A1 in Grand Traverse county.   We have seen every recent A1 attempt using horizontal technology in the past few years end up as a failure and even just noted the recent Sherwood 1-22 HD1 failure here downstate.   We will be watching Wyotex’s actions closely now that weight restrictions (i.e. Frost Laws) on Michigan roads have been lifted by MDOT.

All wells permitted this month were seen recently on 2015 applications.  There were 8 permits in April bringing the YTD total up to 36.

Only six wells were reported plugged in April which is the least amount of pluggings reported in a month so far this year.  The one interesting plugging note here is the Sherwood 1-22HD1 well in Livington county mentioned and pictured above.   This page is the homepage for the Sherwood well on Fowlerville road.   The Sherwood 1-22HD1 homepage is our most visited page in RMP history.  We have 137 photographs, 3 weblinks, and 4 documents attached to the page.   All 137 photos are in chronological order and present a good timeline of the well from before the pad was cleared in September 2013 to the day the final trucks drove off in July of 2014.  If you’re curious to see the chronological lifecycle of a well to completion, take five minutes and flip through the photos and note the dates as you go.   Below are the pluggings reported in April 2015:

That’s it for April 2015’s report.   Note that there is a video at the top of every edition of our Michigan Oil & Gas Monthly (MOGM) magazine.   The video shows the same information as this article but also demonstrates to you how to navigate our map so you can start to learn how to use it yourself.   While 100s of you have been reading each edition of MOGM published here, only 30 to 50 views are registering on YouTube for the same report.   Check out the videos, they’re easy to watch without all the reading.  And, while you’re there, please subscribe to our YouTube channel.  No one really likes to read anyway.