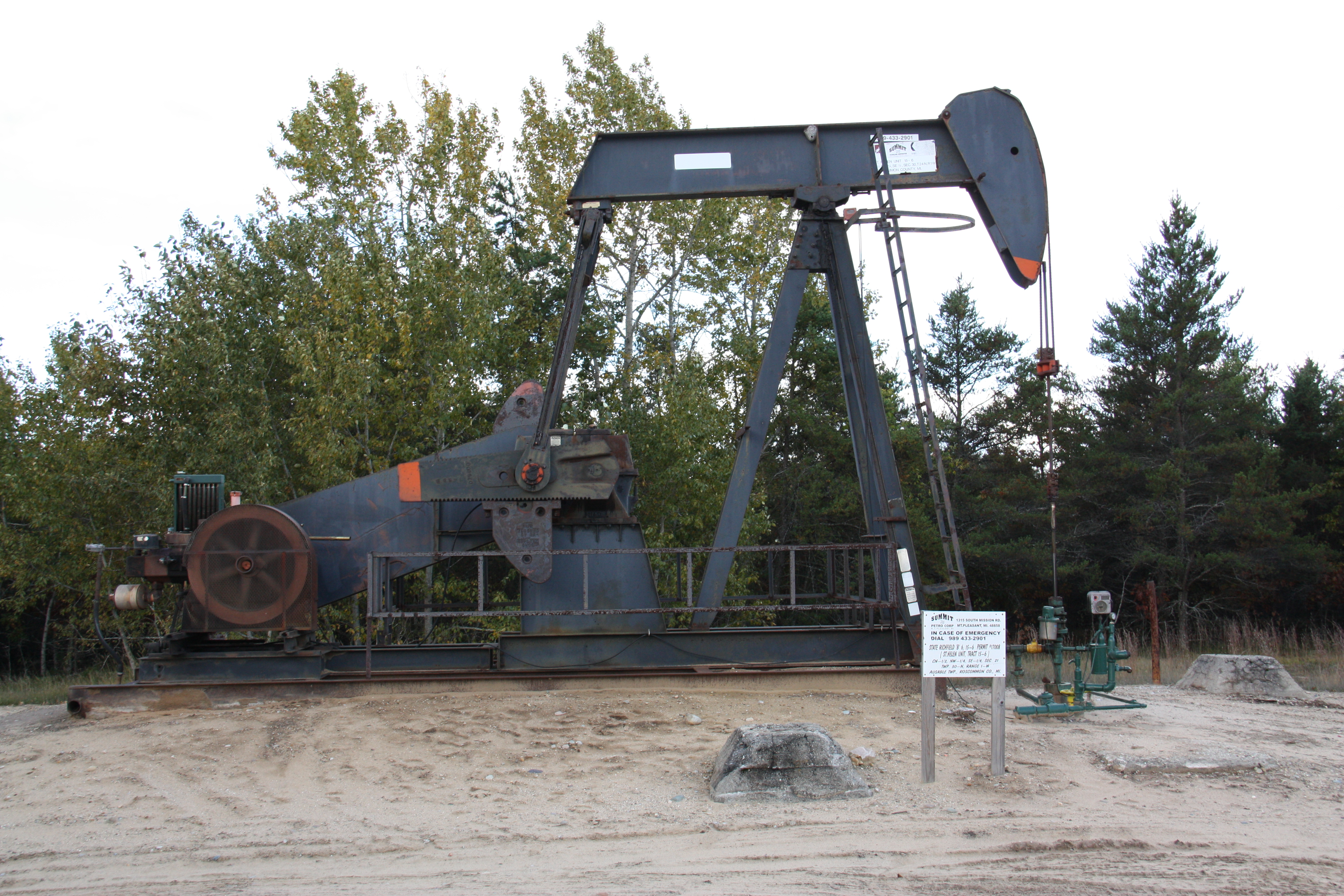 The top story this month continues to be Marathon’s Science Well in Crawford County Michigan.   Two weeks ago Marathon cleared a well pad in an area that we told you about first right here.   Marathon has contracted Cruz Energy to rig up for a test well that will go 4,700 feet into the Amherstburg.  The Amherstburg is part of the Detroit River Group of rocks of Middle Devonian age.  The greatest accumulation  of the Amherstburg formation is between southern Bay and Roscommon counties where its thickness exceeds 600 feet in some places.   About half of its thickness at this thickest point is the Sylvania Sandstone member at the base of the formation.  The outstanding characteristic of the carbonate rock in the Amherstburg formation is its relatively dark color which earns it the nickname from many geologists as the Black Lime.

Because this well is a Part 625 test well, no information about it will be available to the public.   Marathon has recently applied for permits to drill 2 wells into the same formation in Michigan:   1) the State Beaver Creek 1-14 HD1 which is close to the Science Well and 2) the Schlabach 1-7 HD1 in Clare county.   Since information related to the Science Well will be held secret, we will have to wait & watch to see if Marathon has any interest in drilling more wells in Michigan.

Even though RMP has written about the decline of Michigan oil & gas production in recent years, we are cognizant of the fact that millions of barrels of liquid hydrocarbons exist beneath our feet in the Michigan Basin.   In Michigan, like everywhere else in the world, the question for oil producers is and always has been:  can you get that oil up to the surface in a cost effective manner?

The Black Lime is thick and underlies our entire state.   The Black Lime contains oil.   Marathon has acquired a lot of acreage of surface lease land overlying the Black Lime in Michigan where its between 600 and 300 feet thick.   Will Marathon be successful in producing economic quantities of oil from the Black Lime by introducing modern drilling & completion techniques?   Will this be a turning point from Michigan’s oil & gas decline to a period of increased production and change the game in the Michigan Basin?  We will have to wait and see.  Stay tuned to our monthly publications that chronicle oil & gas activity in the Michigan Basin.

In other news, RMP expected to publish Michigan production numbers for the first 6 months of 2015 in this edition of MOGM.  Unfortunately, however, the numbers are simply not ready to report yet.  Hundreds of operators from around the country operating in the Michigan Basin must fill out their production information and file it with the State.  The MPSC then must compile and publish this data; all of the logistics of getting the numbers reported take time.   RMP has published many data disclaimers about the data we publish and this is another good opportunity to talk about managing and reporting big data and the challenges associated with it and how even the largest most well funded organizations face similar issues related to data integrity like we face at RMP.   Just last month, the EIA published this story about the PSM (Petroleum Supply Monthly).   The EIA talks about, on a larger scale, the very same data management issues our very small organization faces very clearly in this excerpt:

Given the timetable for EIA’s data products, much of that information is lagged and incomplete at the time of publication. For several states, the time from a particular month’s originally reported production volume to the time when that same month’s reporting could be considered final (i.e., with no revisions or very minimal further revisions) is several months to more than a year. A recent Today in Energy article detailed the challenges these data lags created in states with rapid changes in crude oil production growth, such as Texas.

RMP recently took a fresh data download of MDEQ/MPSC production data and found that June data was not even 1/3 complete for final reporting according to new metrics RMP has been developing to better understand the completeness of Michigan oil & gas production data.   This inspired me to go back an take a 2nd look at November & December 2014 numbers published in the March 2015 edition of MOGM using a fresh September 2015 data download.   Even though RMP and other authoritative oil production publications numbers reconciled to each other back in March of 2015, it turns out that our December numbers were more than 25% short of the numbers in the most recent copy of the Michigan database.   RMP will update our previously reported numbers and graphs and continue to learn how to deliver the most accurate reporting possible.

RMP strives to maintain the highest data integrity possible.  Oil & gas production data will always be approximate and is dependent upon many factors.   RMP has been analyzing and becoming acquainted with Michigan’s #bigdata for over 5 years now and we will report January through June 2015 data when we feel operators have reported what we consider to be 90 to 95% of all active PRUs through June.

Two more wells were issued Production Resource Unit numbers this month:  Permit#61019 – The Goulding 1-22 well operated by WB Osborn, and Permit#61044 – The Finkbeiner D3-4 HD1.   This brings the total wells put onto production in Michigan for 2015 up to 14 wells.

In September 2015 Michigan received 15 applications, all of which were for oil wells.   4 of the applications come from Wyotex which are really for 2 new wells (All Wyotex wells so far have been 2 for 1 with regard to apps & permits.  1 app is filed for the pilot hole and 1 app is filed for the horizontal).   Wyotex currently has 9 wells permitted and if/when these two new wells are permitted, it will bring their total up to 11 wells permitted.   Five of Wyotex’s prospects are in Manistee county and six of them are in Grand Traverse county.  Wyotex has yet to break ground on any of their permitted wells as far as we know.

In September 2015, Michigan issued 12 permits for wells.   7 of those wells were Antrim Gas wells which RMP talked about in last month’s MOGM.  The other 5 wells were oil wells.  One of the wells of interest below is the West Bay 22 SWD which is near the most prolific oil producing wells in our 2014 listing of top 10 hydrocarbon producers.   We like to highlight information like this to help people understand the basics of oil production.   Because if you think about this, it makes sense:  if you have well producing a lot of oil & waste water, you drill a waste disposal well nearby to cut transportation costs of all the waste.

26 oil & gas wells were published as plugged in the month of September.   The pluggings and applications this month are consistent with the annual average of just over 2 wells plugged for every 1 applied for or permitted.  One well of interest below is the Lucas 1-13 HD1 well which was a Collingwood attempt that never was completed because the well lacked integrity and the ability to hold pressure for hydraulic fracturing.

That’s it for September.  We look forward to publishing the first 6 months of production for 2015 when the numbers are closer to ready.   Feel free to leave any comments or suggestions below.