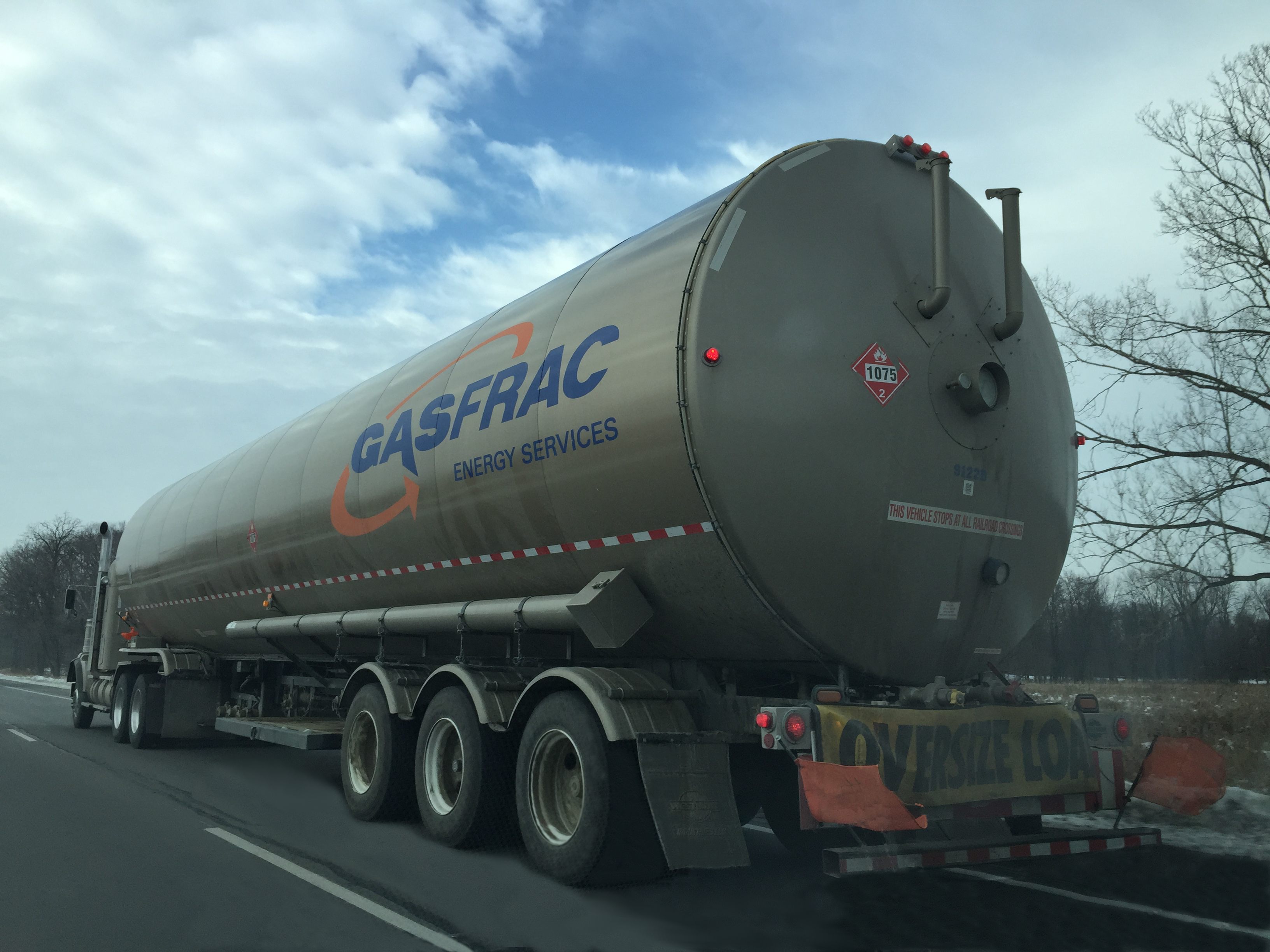 We have seen a poor success rate recently in the A1 Carbonate in Michigan for operators targeting the A1.  Many recent A1 attempts in Michigan have made the HVHF list calling for millions of gallons of water for completion in the application.   Operators have changed their completion techniques on the fly and have moved away from such high volumes of water and hydraulic fracturing altogether; but still have had no success.   One theory is that the water is damaging the formation and it therefore will not produce.  Since gelled propane is a hydrocarbon (C3H8), it is soluble in the A1 formation fluids unlike water an perhaps may not damage the formation.  One could guess that GasFrac is here in Michigan to perform a completion in the A1 using gelled propane to test this theory but we cannot substantiate that guess.  To that end, I sent FOIA request (FOIA 2339-15) to the State of Michigan to ask if GasFrac was operating anywhere in Michigan.  The official response back from the State of Michigan is that to the best of the public body’s knowledge, information, and belief, GasFrac Energy Services is not active in the Michigan oil patch.   If we hear more about GasFrac in Michigan, we will let you know.

Other activity of interest in Michigan this month is Core Energy’s ACOWS to convert the El Mac Hills #4 2-18 well on permit 42766 to a CO2 injection well.  The El Mac Hills #4 2-18 produced 172k bbls of oil and 25 million gallons of waste water over the course of 19 years and 9 months (1990 to 2010).  Remember that generally only about 25% of the oil in the reservoir is recovered at the surface in conventional oil production.   Core Energy hopes to recover more oil by using the secondary recovery technique of gas injection to produce an additional 25% (approximately) of the reservoir’s oil.  While this is not first time we have seen a gas injection well in Michigan, what Core Energy is doing is considered cutting edge.

Groups like RMP and the DOE are watching CO2 injection very closely as the sequestration of green house gases is very important to help mitigate the release of GHGs into the atmosphere which impact climate change.   If this technology is successful, it can go a long way toward helping the United States and our friends in India and China curb greenhouse emissions.  This type of technology can make a significant impact on climate change over the next century.  This is especially true in countries like India and China where the use of coal will see increased demand over the next several decades as these energy hungry countries seek to improve the quality of life for their citizens without damaging their air quality or releasing GHGs into the atmosphere.

The State of Michigan received 9 applications for wells.  Two of which were for waste disposal and 7 were for oil.  3 of the oil wells are on land owned by the USDA in the Huron-Manistee National Forest.  RMP watches activity on US and Michigan owned land closely because we find that if we don’t look out for fresh water contamination problems on public lands, they have the potential to fall by the wayside.

There were 15 new permits issued to operators in Michigan in the month of February.   Wyotex Drilling Ventures, based in Lakewood Colorado, is exploring Michigan’s A1 Carbonate in Grand Traverse and Manistee counties.  Wyotex is new to Michigan and was just issued an operator number in the month February by the MDEQ.  Like all A1 wells in Michigan, RMP will be watching these wells closely.  Another point of interest is the Miller Antrim D3-30 well which targets the Antrim formation.   Most all hydraulic fracturing in Michigan has come to a stop since the mighty Marcellus shale flexed its muscles in Pennsylvania in the last decade.  It has been an infrequent occurrence to see a well permitted to be frac’d in Michigan in the last couple years.  Below is listing of February 2015’s permits, click the image to enlarge.

There were 40 wells reported plugged in Michigan in February.  Remember, RMP reports wells plugged in the month they were reported by the MDEQ.  Often times the plugging date is in the past and the paperwork is processed by the MDEQ and published in subsequent months.

Here are a couple other mentions of activity in February 2015:

Michigan added one more PRU# to its list of producers this month.  PRU#21671 came online in the month of February for Summit Petroleum.  This new PRU produced 291 bbls of oil in its first month of production or about 9.7 bbls/day.   Last month’s new entry, the USA Merrill 1-18A well, saw production fall to from 5.1 bbls/day to 1.2 bbls/day; an over 76% decrease in production in just its 2nd month of production.

The last item of interest in February 2015 is an ACOWS from Whiting Oil to drill a 3rd lateral (the Van Damme 41-4 HD3) in Sanilac county which expires April 15, 2015.  Notes in the ACOWS indicate Whiting’s laterals are missing the formation and hitting salt like we saw at Davids Acres LLC 1-19HD1 well drilled by Devon in 2012.  We have long surmised that one of the difficulties in the A1 is the roller coaster shape of the formation’s pay zone.  Our research indicates operators can have trouble geosteering the drill bit in this formation.  If an operator cannot stay in the pay zone, the production potential from the well is obviously decreased.

That’s about it for our reporting in February 2015.   Thank you for reading.  If you have any questions or have a suggestion, please leave a comment below.   Come back next month to read a recap of the March 2015 activity in the Michigan oil patch.