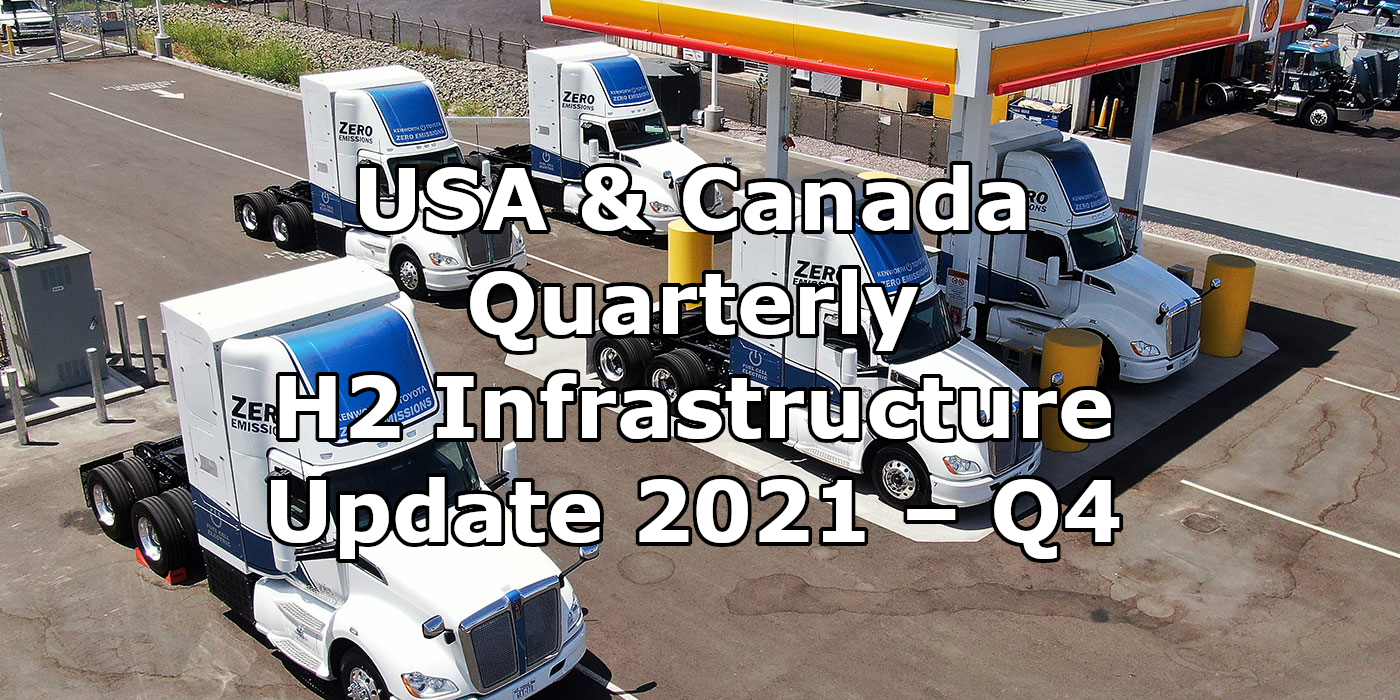 This quarterly report chronicles key H2 infrastructure developments & stories from the past three months and is published on the last day of the quarter.  Each key news item  will be highlighted with a synopsis of the key event, a link to the story, and a link to its location on RMP’s Google map of hydrogen infrastructure across the USA & Canada if applicable.   Simply click the map link to go directly to a zoomed in map marker on RMP’s map of H2 infrastructure.  The marker on the map will be used as a virtual data repository for that specific location (like a Wiki page for that location).  If you want to learn more about what’s going on at that location, you can go to its homepage to get all information available for that location.

This month (December 2021), RMP added all the legacy hydrogen production infrastructure and pipelines along the Gulf Coast from New Orleans in the East to Lake Charles, Port Arthur, and Houston to the west.   Production locations and pipelines in Corpus Christi were added as well!   A ton of new infrastructure  was added to RMP’s map.   RMP will be publishing a “Gulf Coast” version of our hydrogen map soon to the world wide web along with videos showing just how much information is there for you to use & view on our map platform.

Let’s get started with a look back at the key events transpiring over the past quarter:

10/04/2021 – World’s first off-grid charging system for BEVs mentioned by UPS. This is a topic RMP has been following for years since Elon Musk said all Tesla Superchargers will be off-grid.   It’s been five years since Elon said it, and now someone else is really going to tackle it.  Will be interesting to watch how this is going to work.   This will be the first of it’s kind off-grid BEV charging anywhere & it’s supposedly coming to Dubai, U.A.E.

10/14/2021 – California Air Resources Board (CARB) published their “Hydrogen Station Network Self-Sufficiency Analysis per Assembly Bill 8” analysis. CARB’s mission is to promote and protect public health, welfare, and ecological resources through effective reduction of air pollutants while recognizing and considering effects on the economy. CARB is the lead agency for climate change programs and oversees all air pollution control efforts in California to attain and maintain health-based air quality standards.

Assembly Bill 8 (AB 8; Perea, Chapter 401, Statutes of 2013) has been a primary driving force in the development of an in-state hydrogen fueling network for light-duty FCEVs. AB 8 extended the Clean Transportation Program (also known as the Alternative and Renewable Fuel and Vehicle Technology Program), administered by the California Energy Commission, to support the development and deployment of advanced transportation and fuel technologies. The program was extended in 2013 with new provisions to co-fund the development of public hydrogen fueling stations. Through 2019, 62 hydrogen fueling stations had been selected to receive State support through the Clean Transportation Program. In 2020, up to an additional 94 stations (and 4 station upgrades) were proposed for award through the Energy Commission’s latest grant solicitation in the program. Together with recent announcements of privately funded stations, there are more than 176 total station development projects currently operating, under construction, or planned in California. These developments have enabled the launch of FCEV sales in California and through 2019 the state has been home to the world’s largest light-duty FCEV population, with 7,129 FCEVs at the end of 2020 (more recent industry estimates point to over 10,000 cumulative sales since 2012).

Further, this plant will permanently sequester approximately 95% of the CO2 used to produce the hydrogen and completely invalidate the misleading study by Mark Jacobson at Stanford University who is obviously politically & financial motivated to publish negative information about blue hydrogen

10/19/2021 – Mississippi Clean Hydrogen Hub could produce 110 million kilograms of green hydrogen annually and store hydrogen in underground salt caverns in Mississippi.  Story is behind a paywall.  Also there is no location to add to our map because the storage locations are planned with no specific location announced yet.  If the location is announced, it will be added to RMP’s map.

10/20/2021 – Plug Power in Concord MA released YouTube video about how they manufacture electrolyzers.

11/8/2021 -Alberta Hydrogen Roadmap publishes YouTube video that “lays the foundation for a transition to a sustainable energy future”.  Dr. David Layzell, professor at the University of Calgary and energy systems architect for the non-profit Transition Accelerator, is interviewed about Alberta’s hydrogen transition by Markham Hislop.  Dr. Layzell talks about current hydrogen production in Alberta (5,400kgs/day) and forthcoming hydrogen refueling stations coming to Alberta in this approx 14 minute video.

FCEVs Registered in the USA

FCEV registration reporting lags behind about two months.  So for example, 9/30/2021 data gets published by IHS Worldmarkit about the second week in November of 2021.  Therefore, 9/30/2021 is the most current data RMP can report on 12/31/2021.  The tables below show the most current FCEV registration data in the USA by state and in California by county.   For the first time ever, California now officially has over 10,000 FCEVs registered on California roads.

That’s a wrap on 2021.  Thanks for reading and Happy New Year!  See you next quarter.