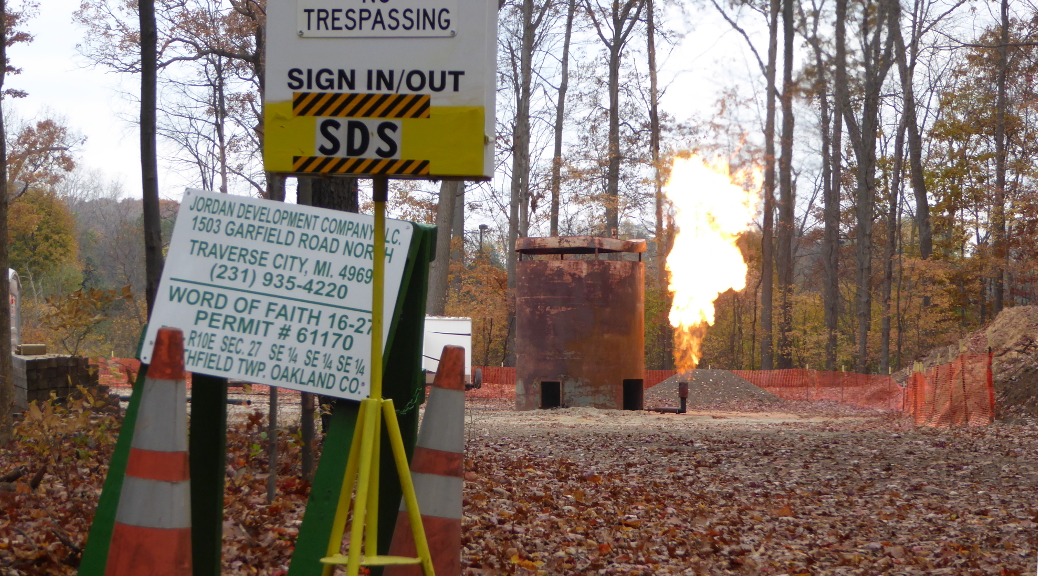 The Word of Faith oil well in Southfield, Michigan is RMP’s top story this month.  This November 2016 Michigan Oil & Gas Monthly is the “what to expect when you’re expecting” edition for Southfield residents. This is because RMP is expecting to find out that the Word of Faith 16-27 oil well is going to be a long-term oil producer.   One year year ago today the top story was that Jordan Development had filed an application to drill an oil well in Southfield, Michigan at the old Duns Scotus property now owned by Keith Butler’s Word of Faith Ministries. It was a big story because many people in the City of Southfield did not want the well and protested it. Keith Butler, however, who owns the mineral rights to the property, wanted to exercise his legal rights to produce and sell his oil. The MDEQ took their time with this well’s permitting process because of the dustup and controversy it caused.   A public comment period was initiated by the MDEQ and an email address was set up for the public to send in comments about the well. Over a thousand comments were received by the MDEQ and RMP posted many samples of those comments in our February 2016 MOGM as we have been following this well’s timeline since it was applied for one year ago.

The Word of Faith 16-27 oil well was drilled in the 2nd half of September 2016 and well completion activities were performed toward the end of October 2016. Currently the well is flow testing as evidenced by the picture to the left of the 30-foot tall flare that sounds like a small jet engine. RMP has included a gallery of pictures & videos of the well at the bottom of this post; you can scroll straight down if you want to skip right to the pictures. The flare in the pictures is one of the indicators RMP is using to speculate that this well is going to be a long-term producer.   Another clue is the strong smell of crude oil that permeates the air as you stand on 9 Mile Road a couple hundred feet south of the wellhead. The third clue is that Jordan is flow testing at all; if Jordan thought it was a dry hole, they most likely would have already said so.   RMP won’t have paper work & initial production numbers to support our speculation until January 2017, but assuming we’re right [and we’re batting about .996 so far with our oil & gas predictions published here] the paperwork is going to show numbers worthy of moving production infrastructure on pad soon. This is why we’re calling this edition of MOGM the “what to expect when you’re expecting” edition. For interested residents, the next paragraphs will explain what you can expect to see (& smell) in the coming months.

What Can You Expect to See Next?

Because this oil well will be the only oil well in Southfield and is isolated from other oil-producing infrastructure, it will need all the equipment necessary to operate as a stand-alone production unit.   The first thing that will happen is the MPSC, who holds jurisdiction of oil & gas production in the Michigan Basin, will issue a PRU# which stands for Production Resource Unit. Then, Jordan will move in equipment necessary to get oil to market whence it can be sold for a profit. All the equipment items necessary for a stand-alone oil PRU are listed and described below in layman’s terms.  Click on any thumbnail image to enlarge it in your browser.

The photo shown below this paragraph was taken on Bacon Road from right here. The well pad in the photo shows an example of everything you can expect to see at the Word of Faith 16-27 well pad in a single photo.  The configuration and foot print of the equipment will be laid out differently because the Southfield well pad is much smaller than well pad shown below. The MDEQ will [most likely] require a flare blind to cover the flame at the Word of Faith well because it’s in such a densely populated area. The flare could *potentially* burn 24/7 for the next 30 years. It would not be surprising for Jordan Development to put a tennis court style fence around the entire well pad so no one can see any of the equipment on the pad. The truth is, if you didn’t know the well pad was there already, you probably never would.

Could More Oil Wells Be Coming to Southfield?

Now it’s time for some speculation regarding the possible addition of more oil wells in the Southfield area. If this well is a strong producer, like I’m guessing it could be, there could be the potential for more oil wells in the area. Looking at a satellite map of the area I see four potential places additional wells could go to further tap the oil reservoir which is approximately 3,000 feet below the surface:

RMP does not have access to the 3D seismic information Jordan Development used to “see” the oil reservoir.   RMP does not know which direction the oil reservoir that lies beneath the surface goes or doesn’t go. But, should the Word of Faith 16-27 show good numbers, it is very likely more wells could be used to drain the reservoir should nearby property owners choose to exercise their mineral rights.   It could be more enticing for nearby property owners to lease their property knowing that the prospects of an additional revenue stream are more likely.

Risks to health and the environment are low from this oil well. The #1 thing to worry about with any well in Michigan is H2S, which is the chemical signature for Hydrogen Sulfide. H2S is a deadly gas that smells like rotten eggs and is sometimes called sour gas. The Word of Faith well does not pass through any sour subsurface zones and there is negligible risk of H2S from this well. If there is a possibility of H2S, the MDEQ will require the operator to have a detailed safety plan in place in case there is an H2S release to atmosphere. Nearby residents would also be informed if H2S was encountered.

More groundwater contamination from hydrocarbons comes from underground storage tanks (USTs) than any other part of the oil & gas industry. Southfield currently has 60 UST locations and 48 leaking UST locations (LUST’s). Think about all the focus this one oil well has received and how little focus those 48 locations with confirmed contamination in Southfield have received. There are literally thousands of active LUSTs in Michigan.   RMP is trying to raise awareness about USTs and LUSTs because they are a real issue of concern where hydrocarbons meet groundwater. RMP advocates for the responsible migration away from crude oil as an energy source and the adoption of Fuel Cell Electric Vehicles powered by Hydrogen. FCEVs will allow us to be energy independent, create jobs, and stop contamination of groundwater resources from liquid hydrocarbons. We can even make our fuel from landfill waste, which could eliminate or reduce landfills altogether which are a serious threat to our groundwater and a large source of greenhouse gas emissions; FCEVs are a win-win solution in this regard.

RMP will always be on guard to watch over and protect Michigan’s freshwater natural resources to the best of our abilities.   After studying oil & gas production in Michigan for many years, RMP has determined that while oil wells do pose a threat to groundwater, that threat pales in comparison to so many other threats that get so little attention.   While oil well construction and monitoring must be done with vigilance, RMP is comfortable saying oil wells rank lower on the list of threats to Michigan’s freshwater resources than many other things.   Farms, dry cleaners, car washes, gas stations, large petroleum storage facilities, oil & liquid hydrocarbon pipelines, military bases, landfills, manufacturing facilities, and more all rank higher as a threat to Michigan’s freshwater natural resources than oil & gas wells. RMP can support these statements with data because that’s what we do; we use data driven science to support our points.

RMP remains committed to looking after Michigan’s great outdoors and helping the MDEQ where we can to identify threats related freshwater wherever it might occur; this includes oil & gas wells.   With regard to Michigan’s OOGM, their ability to monitor and provide surveillance to Michigan’s oil & gas producing infrastructure just got harder because of the falloff in oil prices. Michigan’s OOGM receives funding as a function of oil sold to market. Because oil prices have fallen so dramatically and stayed low for over a year, it is hampering the OOGM’s ability to stay funded to help protect Michigan’s environment. For the first time in a long time, Michigan’s OOGM received funding from Michigan’s general fund which speaks to seriousness of a falloff in Michigan oil & gas activity.

Next month, RMP will detail funding issues with Michigan’s OOGM as our top story and explain the stressed funding situation and take a closer look at Governor Snyder’s 2017 budget for Michigan.  The MDEQ, in RMP’s opinion, is the most valuable asset Michigan has with regard to environmental protection.  The MDEQ is Michigan’s most vital institution for protecting our beloved natural resources and it’s up to us to audit, shape, help, and support the MDEQ.  I hope you will help support the MDEQ or join their ranks or volunteer to help them in their objective to protect Michigan’s environment.   The MDEQ is a public institution here for the good of Michigan’s natural resources. If you find fault with the MDEQ, you can apply for a job there or volunteer to help them if you truly want to make a positive difference for Michigan.  Arm chair environmentalists who take pot shots at the MDEQ without understanding the rigors and challenges of looking after every square inch of Michigan’s land and water are not helping protect our natural resources.  While it’s important to hold our MDEQ accountable, it’s also important to be fair and understand what a tough job they have.  Ask not what our MDEQ can do for your Michigan, but what you can do for our Michigan DEQ.  Be the difference with your actions.  Become a public servant if you think you can help.